How to choose your competition Boules 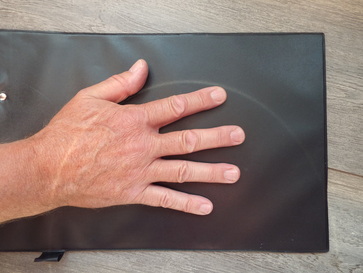 Put your hand out like this and measure your middle finger

This is what a carreau looks like, and what you could achieve more regularly with soft boules.
Size and weight

The shape and size of your hand and the length of your fingers can give a rough indication of the diameter that is likely to suit you best but it is not an exact science. See the image above and the chart below

Generally if you specialize in pointing you may find it advantageous to use a slightly smaller boule than a specialized shooter would use.  This gives shooters a smaller target making it harder to knock the ball out.

Shooters have a tendency to use a larger diameter as in theory this should make it easier to hit out opposition. The difference in diameter could make the difference between hitting the opposition boule or missing it by a millimetre.

Likewise with weight, a shooter will generally prefer a lighter weight (680g to 700g) as it makes it less of an effort to do big powerful throws which is required at the longer coche distances. You will end up struggling in the latter stages of a day of Petanque if you are frequently shooting with heavy boules at long distances. It will be like throwing a sack of potatoes.

A pointer will generally go for a heavier boule (710g upwards) as they will roll less when they land, making it easier to put the boule near the coche.

So to summarise the optimal boules for shooters are large and light whereas for pointers they are small and heavy. How close to the optimal boules you can get will depend a lot on how long your middle finger is. The most important thing is that you feel comfortable holding and throwing the boules.

For example if you want shooter's boules and your middle finger is between 69-74mm (in this case the recommended boule would be a 73) then it wouldn't be advisable to play with boules with a diameter of let's say 76, as they would be far too large and uncomfortable for your hands and impossible to play with.

Pointers will normally go for a boule with a pattern to give them a good grip on the boule and a guide. Shooters tend to prefer a smooth boule as this makes it easier to release the boule out of the hand quickly when shooting.

You will see terms such as Dure (hard), Tendre (soft), Mi tendre (medium/Semi-Soft). In recent times Obut have introduced very soft boules and a new type of hardness altogether known as hardness plus.

Considerations for this are the more tendre (soft with a hardness of 115kg/mm or less) the less chance of rebounding either when landing on a stone or hitting an opponent’s boule. They can absorb the power of a shot much more effectively than hard boules.

Obviously this is advantageous as you are more likely to do 'carreaux' (when the shooter's boule replaces the opposition boule they are trying to hit). This is a very powerful shot to have up your sleeve in competition games. The "very soft boules" are even more effective at this.

The slight disadvantage is that soft boules will mark quicker and they are generally the most expensive to buy.

Hard boules (140 upwards) are the boules of choice for pointers. On rough terrains the hardness will prevent wear. Hard boules are very durable and will last for many years of regular play.

The other option is to go down the middle and play with semi soft boules (120 to 135). These boules have hardness to prevent heavy wear. They also have a tendency to stay within the head when striking out opposition boules. However you won't get as many 'carreaux' as you would with the soft boules but they will last longer. Semi soft boules are a good choice for the middle man in a triples team who has to do a mix of pointing and shooting.

The Hardness + boules are a big step forward and are perfect for top players. A hardness+ boule has the performance of a very soft boule but the wear rate of a semi-soft boule. The added bonus of this hardness is that the bounce is incredibly weak. This is another brilliant asset for shooters, but also for pointers who opt for a high lob shot style.

The material used will also affect the price. Chrome or carbon steel will be less expensive than stainless steel but of course the stainless boule requires less maintenance/cleaning and so will last longer.

The other advantage of a stainless steel boule is that they feel softer and they are very nice to hold because of that.

In the end what it really comes down to is what you feel comfortable with as a matter of personal preference and your budget.